The 1950s was a time for change in the United States. As the post-war economy improved, people gained confidence and began to spend on indulgences – including eating at restaurants with much greater frequency. Soon, Americans began to desire the conveniences of restaurants within their own kitchens to elevate their entertaining experiences. At the same time, the American fascination with the “kitchen of the future” led to new innovation– and as the work/life balance shifted the next 20 years saw a number of inventions, many of which are still used in some form or another today.

In 1951, Thermador launched the first built-in griddle as well as the first warming drawer, both features that were inspired by bringing the restaurant experience to the home. In 1955, Thermador also introduced the first electric cooktop and established the industry standards for cooktop sizes – 30-Inch, 34-Inch, 36-Inch and 45-Inch – as the kitchen design industry took off. Built-in culinary preservation centers are incredibly popular in today’s homes, but you might be surprised to know that this concept was introduced back in 1957 when Thermador introduced its “Bilt-In” Refrigerator. Though the technology and features have evolved over the decades, even back then there were choices to personalize the kitchen – with the Thermador Bilt-In Refrigerator available in stainless steel as well as in colors named Canyon Copper, Turquoise, Desert, Pink, Daffodil Yellow and Sugar White. 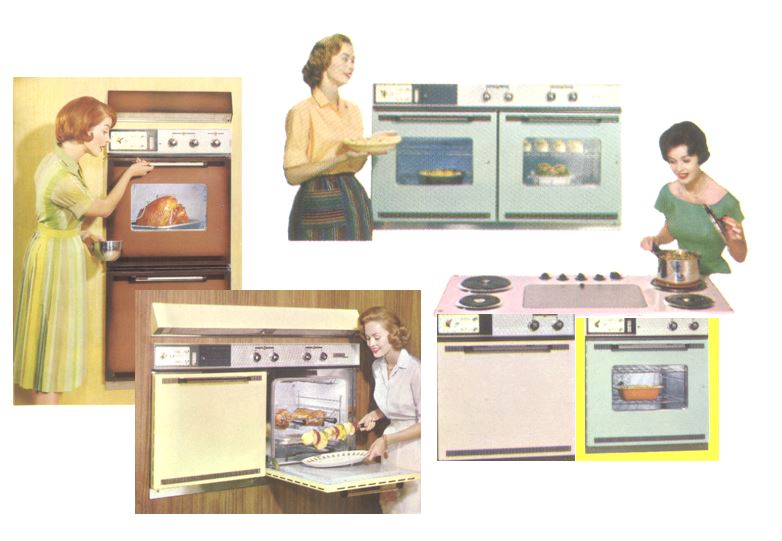 By the 1960’s, home décor saw a whirlwind of pastel pinks, aqua and beige as the design influence from the ‘50s carried over. Never a brand to follow the status quo, Thermador started a new trend in this decade by introducing “black glass” oven door fronts. This design style has lasted for more than 40 years and can still be found in many of today’s kitchens, including in the Thermador Masterpiece® Series line of cooking appliances, including double ovens and much more.

Dishwashers were also quickly gaining popularity as the interest in saving on time, and bringing the restaurant experience home, continued. As this appliance trend emerged, Thermador introduced a wide variety of options, including the first all stainless steel dishwasher tub, a multi-filter dish washing system and the first dual motor and pump for quieter operation. Throughout the 1970s home cooks yearned for more cooking options and technology to help them create a meal faster. Thermador delivered with numerous advances in microwave technology including the first “browning” microwave, combining the microwave with a wall oven. The brand also introduced the speed cooking oven, which combined thermal and microwave energy for faster cooking. Thermador also launched the first smooth top cooktop in this decade, as well as was the first to incorporate a rotisserie on the cooktop. As design and kitchen trends evolved during these decades, Thermador was always a step ahead in innovation,  predicting the needs of culinary enthusiasts and reimagining appliances to add convenience and performance. This unwavering commitment to quality and craftsmanship can still be experienced in today’s lineup of world-class Thermador cooking, cooling and dishwasher collections.